The proposed endpoint of this project was a deployed game server with a playable version of Threephase. One of the first tasks to make sure this was accomplished was to define the scope of the game for the initial version. Clearly, there is enough material to extend beyond a two month timeframe. The core logic of the virtual world took longer than expected to implement, and as a result progress fell behind the list of planned features. Threephase is not currently robust enough for a public deployment, and needs additional work to optimize performance and the user interface. The three evaluation criteria from the project proposal were:

The project was not far enough along by the end of the semester to perform user testing, but the introduction of power systems concepts and scalability of the system made good progress.

Threephase evolved from a turn-based game to real-time before the design was finalized. Real-time strategy games are a more natural setting for players, but when the project was proposed the technology for real-time updates in the browser was not mature. While still an emerging technology, recent developments in non-blocking web servers and browser sockets led to a shift in Threephase ‘s playing style.

Instead of requiring a somewhat complicated system of action points and player turns, the game world is persistent and never stops. This presented some additional implementation challenges, but in the end will be a more compelling interface.

The project uses the Lighthouse issue tracking system to track milestones and tasks. The initial schedule planned a milestone every four days. This duration ended up being too short, and did not allow for slippage or early finishes. Week long milestones (for a project receiving 3/4 of the time of its participants) would be a more flexible and realistic time period.

The time spent on Threephase was tracked over the past two months with the time tracking tool Timetrap. Split into general categories, most of the time was spent on the backend code (which determines the data storage and object interaction). The second most time was spent in testing. 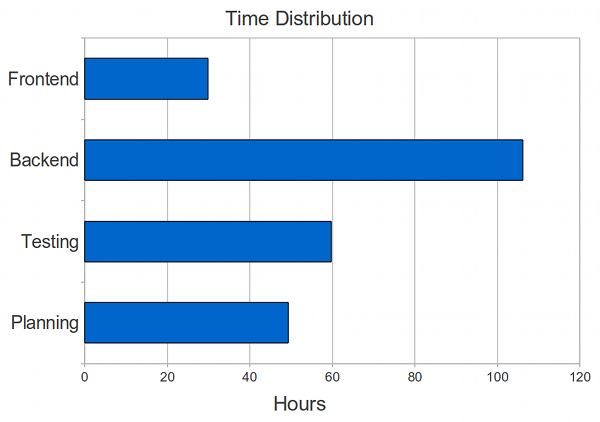 The initial concept of Threephase evolved over the summer months, culminating in software requirements and architecture documents (now in the project’s wiki page). The first month of development was spent implementing the core data models, application controllers and basic web views to interact with the game. The second and final month was spent implementing the game logic - maintaining consistency in the virtual world, updating objects and enforcing the different regulatory conditions.

Threephase represents a proof of concept of a platform for teaching and experimenting with power system concepts in the context of a familiar game-like interface. The motive roughly follows the ideas behind the Serious Games Initiative (and other, less formal pushes towards games for learning and experimenting).

Serious games try to leverage the immersive power of games for education, for both academics and continued learning. These games also serve as excellent training tools within industry. Instead of building strictly academic simulations, experts can make an approachable game, something that laypeople would be interest in playing and the experts themselves would enjoy outside of a class or job.

A core requirement of serious games is to avoid simplifying critical components, which could alienate the experts of the field, while balancing enough au- tomation that newcomers can learn at their own pace. The game needs to be able to adjust the scope of decisions a player must make, and the extent of the complexity they see, in order to allow players to focus on only certain aspects of the system at one time.

Something discovered firsthand over the course of this project is that it can be overwhelming to be responsible for all aspects of the system, coming dangerously close to the micromanagement of resources. The game must balance between system level decisions and real-world issues that high-level simulations often ignore. The player should be able to select from a range of difficulty levels that automate different areas of the system to adjust the difficulty.

Collaborative learning is also possible with serious games. In Threephase, each State is run by an individual player, but this could be expanded to allow cooperative play - one player controlling the generators and another the transmission lines. This actually reflects another real-world regulatory scenario, where these areas of the power grid are separated by law into different management entities.

There is a long list of features that could be added to Threephase. The most interesting and pressing items are:

The implementation of transmission line construction and the respecting of line constraints in determining the operating levels of generators. The game is lacking a key component of real power systems without this. LMP-style regulation depends on this feature.

The consequences for not meeting demand in Threephase are unclear.

The player is warned of the condition and their state essentially freezes in place - customers aren’t charged, operating costs aren’t deducted, and no power is generated. This is an overly forgiving approach, as there are serious consequences for an outage in the real world ranging from unhappy customers to financial penalties and even eviction from the market.

Players in Threephase are given this great leeway to allow new players a build-up period, where they can build enough generators to meet demand when first joining a game. This phase could be re-worked to occur before players officially join the game and must being running their utility.

Once the game has started and harsher consequences are in place, a more useful warning for players will be that “generation is projected to come dangerous close to not meeting generation,” thereby giving the player a chance to resolve the situation before an outage.

The load profile of each city is static, and varies only linearly with the population. This could be improved not only by introducing more interesting variations, but by incorporating the idea of demand response. If customers are offered time-dependent electricity prices, they (or their networked appliances) can schedule their operating hours to minimize their costs and stabilize the load for generators. For example, electricity is generally less expensive at night due to excess capacity (and can even have a negative price), and customers are unaffected by short voluntary outages of certain appliances.

This feature would require additional intelligence in the load profile algorithm, as its value would be based on price as well as time.

The maps assigned to each State must be generated more intelligently, creating a natural a landscape with a relationship between blocks. The current implementation does not allow for realistic groupings of generators around certain resources (e.g. wind farms in a windy area), since the indices can shift dramatically from block to block.

The multiplayer aspects of the game could be expanded beyond shared national fuel prices to include interstate trade. Interstate transmission lines are implemented but not exposed to the player in the interface. Fuel contracts and contracts for different on transmission have also been proposed.

The map and chart visualizations need to be improved to be more accurate, interactive and useful. The map rendering was intended as the primary interface for the game, but sits as a sidebar in the current implementation. It should present a natural way of viewing the geograph of the State and interacting with the generators and transmission lines. Threephase exposes a JSON API for nearly every function of the game, so the possibilities here depend primarily on user experience decisions.

Because an API already exists, a mobile client would be a good addition to the system, so players can keep track of their power grid without being near a browser.