How do you tell the universe’s story as our story? Myth has been intertwining the small and the large for a very long time, with varying degrees of success. Our modern physical cosmology is another mythic story in the suite of human cosmogonies. Though it holds a special place as one that is connected to physical reality, it may be interpreted in many ways. By implementing mechanical and digital interaction technologies, the interpretation can become re-manifestation, where the observer tells a personal story of the cosmos.

In 2009, I along with three teammates at the University of Michigan tried to make sense of that question. We received a grant as a part of the GROCS program, which was started to try and encourage inter-departmental collaboration unified by technology. The team consisted of four people from three departments:

In November 2008, we proposed that over the next semester we would:

“[…] explore the possibility of a collaborative universe creation computer game written in Java and Processing. Based on a true to life cosmic starting point, participants can manipulate galaxies and change the laws of physics on the fly. The creator can allow players to catalog and experiment with a shared universe (similar to the game, Spore ) while exploring scientific laws and theories of creation, order, and design.”

We named the project “August 23rd, 1966,” after the date of the first photograph of the Earth from the far side of the moon by Lunar Orbiter 1.

Our proposal was accepted, and from January to May 2009, we focused our ideas into a three day interactive gallery installation. Visitors could configure and create their own personal star, then witness its birth, life and death in a virtual universe alongside others’.

This writeup is split into a few separate posts: 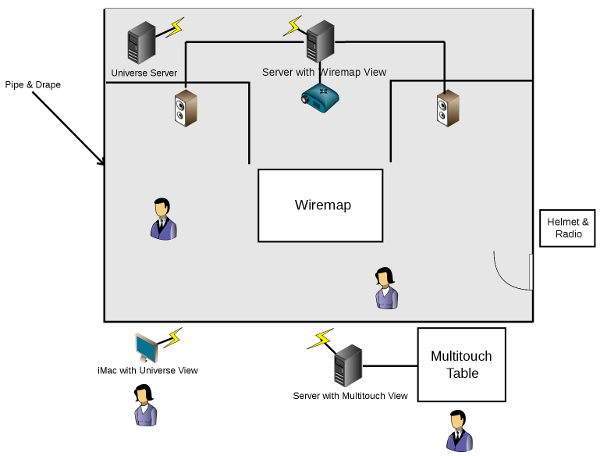 A visitor enters and sees a desktop computer, a multi-touch table and a big black tent. They approach the multi-touch table to view a galaxy of stars. They manipulate the viewpoint, with their hands, and select existing stars to see details of their makeup and date of birth.

The user then selects a location for their own, personal addition to the universe: a new star.

A webcam connected to the multi-touch table automatically configures the temperature (and thus color) of the new star based on the color of the user’s clothing. This information is fed over the network to a computer powering a Wiremap, located inside the black tent.

The user dons a radio headset and space helmet (a modified face shield) and steps into an antechamber at the edge of the tent - a simulated airlock. A sound dome suspended from the ceiling fills the room with ambient industrial noise, much like the loud life support systems on the space shuttle. Verbal instructions are piped to the user from the multi-touch table’s computer over the radio headset, and a second visitor in the gallery can acts as “mission controller” and communicate via another headset. Much like NASA’s controllers in Houston, TX, they do not have the same visuals as the person in the tent.

A voice instructs the user to place their finger on a sensor at the edge of a small black box in the airlock, lit by a single red bulb, in order to check their life signs. (The box is a heartbeat detector and its reading is used to set the oscillation frequency of the new star.)

These events are synchronized with the Wiremap, so when the visitor is informed that the airlock door is unlocked and they enter the darkened tent (simulating the isolation of space), the birth of their star begins in front of their eyes. A new voice on the headset occasionally describes the unfolding sights, and the visitor is free to walk around and examine a kinetic three dimensional representation of their star’s creation (a light field suspended on a grid of strings).

After a few minutes, the process is complete and the user is directed to leave the tent and return their helmet. Their star is now a part of a universe shared by all of the other visitors to the gallery. A second computer near the multi-touch table offers a view of the entire universe via a web browser, with instructions on how to keep tabs on stars from home.

This video gives a sense of what the final gallery installation looked like, and hopefully a sense of the experience.

August’s installation can be considered a play off of the many-worlds theory - alongside our world, with its crumbling economies and warring nations, there exists a digital universe that is directed by you, the user. Just like in our known universe, many parameters are outside of your control. The interesting part is choosing what you can, timing as you may, and watching the results.

Our intention was to create a multiplayer environment, where visitors to the gallery and online users from elsewhere are interacting in the same virtual universe - we called it Twoverse. Users would begin their experience in the gallery with our unique hardware and visualizations, then continue to monitor the objects they create in a web interface from home.

From a game design perspective, we took into account the potential for replayability of what we were creating. We reasoned there were a few factors that would hopefully give users reason to return to the installation or visit the website:

Objects in the Universe

We envisioned the universe would start with some phenomena and astral bodies, but the rest was up to the users. There are two different categories of objects, each with a set of parameters configurable by the user: man-made bodies and celestial bodies. These objects span from human scale (single science satellites or cities) up to unfathomably large (galaxy clusters).

Some of the parameters envisioned for satellites include the intended research purse, nationality, speed, orbit and destination. For planets, the parameters could include size, density, composition, orbit and population.

The current version implements a single object: stars, with configurable size and temperature.

I’ve posted more detailed descriptions and documentation for each of the core components of the installation in separate articles.

The most important goal to me, and one we did accomplish, was to complete a vertical slice of the entire Twoverse system. Our gallery installation and the hardware and software that supported it touched an amazing number of topics, and I know everyone on the team learned a great deal about their own and one another’s fields in the process. During this project, I expanded my knowledge with hands on experience in:

There were a few items left incomplete that I think are interesting enough to mention as possibilities for future work.

Far from an isolated simulation, this parallel virtual universe could have crossover with our current space (and in real time!). Imagine the Sun in this virtual universe mirroring the solar flares of our own.

The proliferation of real-time data APIs over the Internet present an opportunity for integrating these information into the game. In another example, the user interface could become blurred during periods of high proton wind, or space vehicles and satellites could lose communication and spin out of control.

Twoverse could also bring in factors here that have nothing to do with astronomy in an attempt to relate more directly back to the human scale - e.g. the amount of activity in the gallery could determine properties of some special galaxy cluster, or the people in the room could automatically have an asteroid generated for them.

Time is a big issue with this game, one not sufficiently explored.

The progression of events must be slow enough that you can make some decisions one day, but then you have to wait 24 hours or more for big enough changes to happen. The speed must also be fast enough that we can demonstrate phenomena in a reasonable time span.

Not all of the objects need obey the same time scale, since the goal of Twoverse isn’t to be absolutely accurate. The time scale for stars could be greatly accelerated so we can ultimately see them collapse. For space travel, maybe it takes 3 hours instead of 3 days to go from Earth to the moon.

Continue to the next section, details of the software system Twoverse.