The Simulated Time of Threephase

A primary task for any game is making things move. The default approach in a single-player, desktop computer game is somewhat clear. The software has total control over the CPU, and there is only a single player waiting for game world updates. A web-based game needs to optimize for many simultaneous games, while minimizing server costs.

In a single-player, desktop computer game, it is reasonable to set a small timestep (e.g. 1 second) at each of which the game will recalculate and update the entire world. Powerful processors permit this method to scale up to very large games locally, providing the player with a consistent, up-to-date world.

Unfortunately, this strategy doesn’t scale to the web, where a server will have more individual game instances to process and where it is infeasible to dedicate an entire processor to a single game instance at all hours of the day. Thanks to the patterns of web users, there are some relatively easy ways to decrease the amount of work that needs to be done. Updating at a regular timestep would be overeager, when a player typically isn’t visiting the web application every second or demanding real-time updates. Users are much more tolerant of short delays (i.e. 1-5 seconds) on the web than in desktop applications.

At the minimum, Threephase updates on demand, only when the player visits their game. To provide background, out-of-band notifications (e.g. e-mails with in-game alerts), however, the game does occasionally need to be updated to check the conditions. Instead of maintaining a steady, short timestep, Threephase gradually decreases the interval between updates as a player stops visiting the game. 12 hours after a visit, the game updates only once an hour. Three days after the last player visit, game updates may be as infrequent as once a day.

Players visiting every day (and by implication those more invested in their virtual world) will receive an appropriately higher update rate, thanks to the processing power left free by those visiting Threephase less often.

The technical impact of this design is that every element of the game needs to be able to update itself over any time interval - 10 seconds, 10 minutes, 10 days. Instead of simply calculating the difference between now and 1 second ago, the objects need to handle updates spanning multiple days. This is important in Threephase because there are certain statistics and calculations that need to occur exactly once per day. That includes:

The algorithms to calculate these values need to be able to step through the calculation for multiple days, and not condense the change into a single value. For example, if three days have passed since an update, the server must to calculate the marginal price of power on each of the three days, not on average. It is possible to use an integral in some situations where the calculations per day are unimportant, and this method is preferred if possible.

In addition to the question of when to update, the game must decide how much to update. A naive approach is to update every game element, every time, starting from the top of the object hierarchy. This method grows in complexity exponentially as games are created, and does a lot of unnecessary work. It also runs into problems with a fixed timestep - if the work cannot be finished before the next interval (e.g. 1 second), the updates will fall behind and never catch up. Another method is to maintain a list of only the objects that explicitly need to be updated. This avoids duplicated work, but is difficult to maintain. 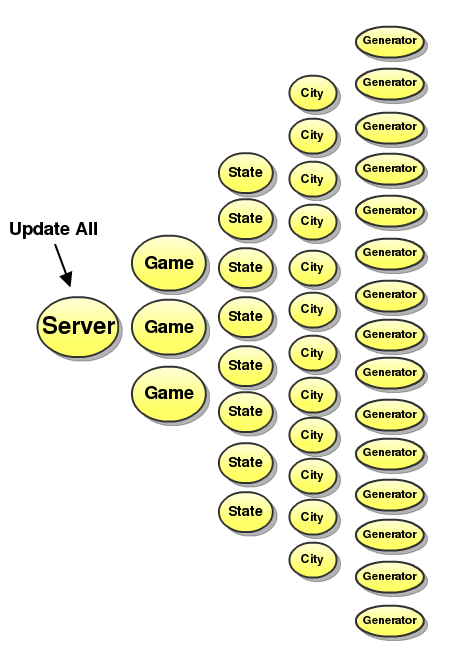 A representation of naive, update-all approach to game updating. A naive approach to update scope chooses to update every game object starting and the top of the object hierarchy. This approach is not scalable to many simultaneous game instances, especially with short timesteps in between updates. 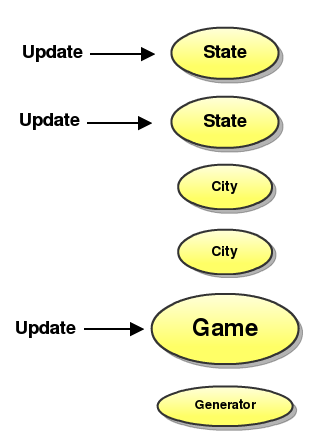 A representation of improved, list-based update approach game updating. An improved scope for updates maintains a list of specific objects that need to be updated. It saves time and work over the naive approach, but still has difficulty scaling in small timestep situations. 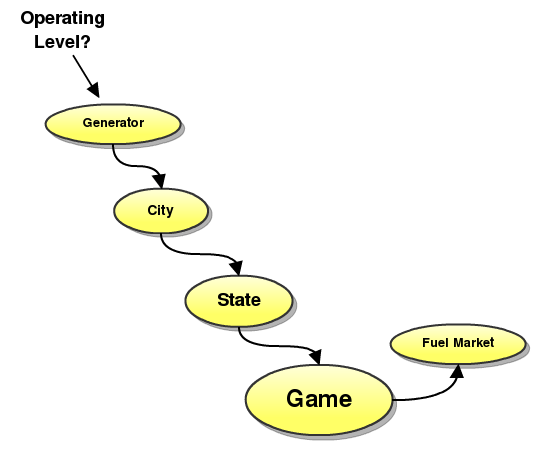 A representation of lazy approach to game updating. A lazy approach to update scope updates objects only on demand from player actions. A request for the operating level of a generator may or may not propagate up the hierarchy of objects, depending on the last update time of each object in between.

Threephase uses a distributed update strategy, where updates start at the lowest levels of the hierarchy and propagate upwards only as needed. This approach harmonizes well with HTTP, which is closely tied to a request/response cycle of communication between client and server. For HTTP, there is no concept of a long-running job that continuously updates the game. Clients should also not have to worry about keeping the game state up-to-date.

When a request arrives, the server need only return the best answer it can find, not necessarily the perfect answer. This approach relies on caching at multiple levels of the hierarchy to update the minimum amount of game state necessary to maintain consistency. This frees up processing power for other games, and also increases the response time for players.

These update issues are compounded by the fact that games are permitted to scale the passage of time to shorten game duration. Running a power system in real-time speed would be an achingly slow gaming experience, and it would be difficult to observe trends over time. Instead, the time in game can be scaled up as much as 200 times normal. The in-game time is displayed on every page, and begins counting from the epoch of the game. This represents an accelerated view into the future, allowing players to see the near to medium-term implications of their choices.

At the high end of the time scale, update intervals can be especially problematic. At the maximum (200 times real-time), a day passes in game every 12 normal minutes. Nearly every player visit is crossing dozens, if not hundreds of day boundaries. The calculations mentioned must efficiently handle updating a large number of days.

To take advantage of the useful time helper methods in both Ruby and the Ruby on Rails web framework, Threephase uses a dynamic GameTime class when dealing with in-game time. The root problem is that given a Time object, the system needs to be able to tell if it has already

Without a steady timestep, all updates must handle the possibility that multiple days have passed since the last update. The lower timeline shows how the day boundary crossing problem is compounded when game speed is increased. been scaled from real-time to game time. A method receiving an instance of GameTime has some implicit metadata (the fact that this is a GameTime, not a regular Time) that the time is already scaled. In addition, the class provides automatic conversion between real and game-time as needed.

Each instance of a Country generates a unique GameTime class definition, with the game’s epoch and speed stored as class constants. All times are scaled forward from the epoch (and an error is thrown if a pre-epoch time is passed as an argument), limiting worry about time scaling to a single location in the code base. The class can smoothly convert between scaled game time and unscaled real time.

Continue to the next section on implementing Threephase.